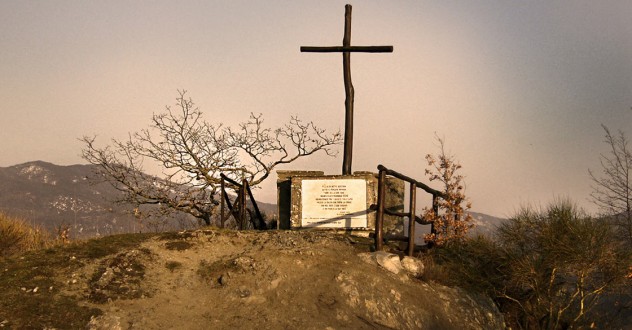 Discover the mysticism of St Francis of Assisi’s land in the Valtiberina, Tuscany. Organise your religious holiday here.

The Valtiberina is definitely one of the most significant valleys for the history of Saint Francis of Assisi, because this is the land that linked Assisi to La Verna, where he received the stigmata.

The Valtiberina houses visitors and offers them the places that were held most dear by the saint, places where he spent nights during his wanderings, where he helped people or founded hermitages (sanctuaries).

These places are easily reached by car, but once you’re there, you’re plunged into a deep mystical atmosphere, where silence is a natural condition and the desire for meditation is palpable.

The place was donated to Saint Francis in 1212. Today, you can still see the bed that he made by placing a few leafy boughs over a rock.

Montecasale is known for an episode of the saint’s life that took place when he met two thieves whose skulls are still visible in the hermitage. The last time Saint Francis was here was in 1224. The hermitage of Montecasale also welcomed Saint Anthony and Saint Bonaventura di Bagnoregio.

The hermitage of Cerbaiolo is located in one of the most evocative places of Valtiberina, clung as it is onto a spur of rock dominating the whole valley and Lake Montedoglio.

In 1218, the monastery was donated to Saint Francis, who then brought his friars. After twelve years, the friars received here in Cerbaiolo the visit of an important guest: Saint Anthony from Padua.

In 1700, St. Anthony’s Oratory was built, and here you can see the straw bed where the saint slept during his visit.

Those who visit la Verna cannot miss the beauty of Cerbaiolo. There is a local saying which says that if you see la Verna without seeing Cerbaiolo, ”it’s like visiting a new mother without looking at her child.”

Monastery of la Verna: this is one of the most significant places in the spiritual life of Saint Francis.

According to the text “Legenda Maior” written by San Bonaventura, Christ appeared to Saint Francis right here (in the shape of a seraph) and then the saint received the stigmata. This sacred scene, with the background of La Verna, was painted by Giotto in an altar-piece fresco that is now kept at the Louvre and in the “Leggenda Francescana” visible in Assisi’s basilica.

The monastery’s structure is a typical example of the local architecture. It is completely made of stone, and surrounded by a thick forest of beeches and fir trees, which contribute to the evocative and mystic aura of the place.

As soon as you reach La Verna you will be pervaded, charmed and impressed by the unique atmosphere released by the monastery, and it will become natural for you to lower the tone of your voice and walk in a dignified manner.

You will get the most powerful hint towards meditation as you reach the “Sasso Spicco”, a rock spur that is incredibly hanging from the mountain. This was Saint Francis’s favourite place for praying.

The history of this important monastery in Anghiari is strongly connected to the lords of Monteauto.

A few miles from the monastery, you can see the hunting grounds surrounding the Castle of Monteauto whose owners, in 1224, donated a new habit to Saint Francis, who was walking through their properties on his way back to La Verna.

The habit that Saint Francis was wearing was indeed dirty and barely mended with broom stalks. Saint Francis accepted the gift of Count Alberto, who also told the saint that he would build a new monastery for the Franciscan friars.

That intention, however, was not realized until the 16th century, when a descendant of Count Alberto had the monastery built after a dream. In this dream, Saint Francis reminded him of his ancestor’s promise and even indicated the place where the monastery was to be built.

The story goes that the broom stalks of Saint Francis’ worn habit kept on blossoming every spring until the relic was confiscated by the noblemen of Florence and was moved to the Church of Ognissanti (in Florence) where it can be seen today.

The Monastery of La Croce lies at the top of a long and steep road that runs right through the middle of Anghiari.

This road is called Ruga di San Martino, and its construction was ordered by Pier Saccone Tarlati in 1300.

The monastery was named after a cross made of branches that was left here by Saint Francis during one of his journeys. After a penance period in La Verna and receiving the stigmata, Saint Francis decided to go back to Assisi. On his way back to his birthplace, the saint left in Anghiari this cross as a symbol of the ”living cross” that was carried by Jesus Christ and therefore as a symbol of Christ himself.