Staying in the Valtiberina offers you an interesting route for art, rich with della Robbia masterpieces. Discover the family that changed in an indelible way the modern western culture.

The intense artistic activity of the Della Robbia family lasted for a remarkably long time, from the early decades of the 15th century to well into the second half of the 16th century: more than one hundred years which undeniably influenced all modern culture of the Western world.

Luca Della Robbia was the founder of the Della Robbia family, praised by Leon Battista Alberti as being one of the fathers of the Renaissance. He was a cultured artist, interested in new artistic forms, who succeeded in ‘inventing’ a brand new technique and thus producing “glazed terracotta sculptures and paintings”.

He was, in fact, the artist who single-handedly managed to raise the art of ceramics from being considered one of the ‘minor’ arts to being an artistic expression on the same level as that of the very best paintings and sculptures. Thanks to his nephew, Andrea, glazed terracotta art spread all over the area, becoming more and more appreciated with an increasing number of buyers; their specialized workshop, situated in Via Guelfa in Florence, became the nucleus of its power and influence in Tuscany.

Andrea’s son, Giovanni, continued to work successfully in this field from his workshop while his brothers continued creating high-quality artistic objects using their great-uncle’s technique.

Luca, Andrea, Giovanni and then Francesco, Marco, Girolamo and Luca (Jnr): three generations of a family of artists who were an intrinsic part of the history of a century of Tuscan and Italian art. 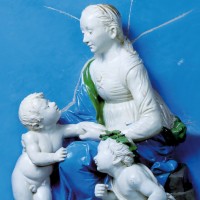 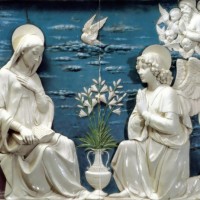 Set up in the Arezzo State Museum of Medieval and Modern Art and organized by Giancarlo Gentilini and Liletta Fornasari, the exhibition I Della Robbia, il dialogo tra le Arti nel Rinascimento’ intends to demonstrate the versatile and fascinating development of the art of glazed terracotta created by the Della Robbia family (thus called ‘robbiana’) during the Renaissance: starting from the mysterious reasons for the ingenious ‘invention’ of Luca della Robbia to the diffusion of this “new, useful and beautiful” art, as developed by the Della Robbia family and by the rival Buglioni’s workshop; but most of all, this exhibition wishes to examine, for the first time, the close and fertile relationship existing between the varied arts.

Sculpture, painting, architecture and the decorative arts are compared to one another in this fascinating exhibition where you can admire, in addition to the Della Robbia masterpieces, the works by the most important figures of the Renaissance – Donatello, Ghiberti, Andrea del Verrocchio, Rossellino, Pisanello, Filippo Lippi, Pollaiolo, Ghirlandaio, Perugino, Lorenzo di Credi, Leonardo, Fra’ Bartolomeo, Domenico Veneziano, Fra’ Carnevale, Sansovino – passing through a century of Italian history of art and through the exciting moment of the Tuscan Renaissance.

Therefore, this is an ambitious and absolutely new exhibition which will allow you to reinterpret and further understand the meaning and the value of an exceptional form of art of which there are still many examples remaining in the Province of Arezzo.

And so the exhibition becomes the very heart of a journey across this area – between the Casentino, Valdarno, Valdichiana and Valtiberina valleys – along wonderfully romantic itineraries where art and nature merge together in an absolutely fascinating combination.