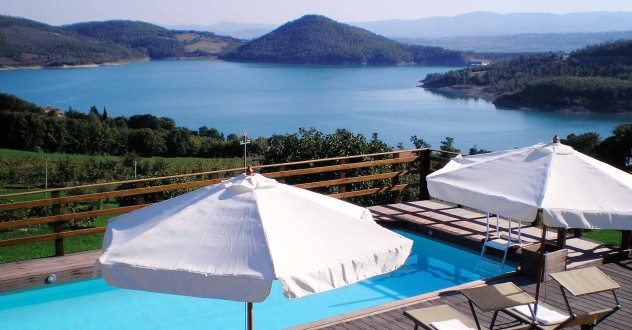 September is the month in Tuscany of historical and cultural events, our last minute Tuscany holiday rentals: booking September! gives you the opportunity to attend at unique events in our Arezzo land: Saracen Joust in Arezzo, Palio della Balestra in Sansepolcro and Premio Pieve Saverio Tutino in Pieve Santo Stefano. 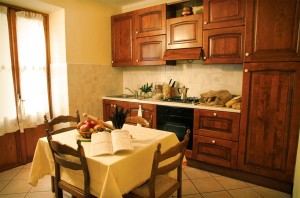 The rooms and apartments are equipped with all the amenities to offer holiday highest quality accommodation. Thanks to our attention to nature we offering to our guests stay low impact on environment and zero-carbon. The kitchen of the restaurant Le Ceregne Bio is natural and organic in the traditional Tuscan recipes and we buy natural local products (km zero).

The dishes cooked in our restaurant are based on local recipes and Tuscan tradition. We like to propose flavors forgotten over time and unique recipes that have made the Italian cuisine the best in the world. we use recipes handed down for generations in our family and recipes registered in the Traditional Tuscan Food Products recognized by Ministry of Agriculture, Food and Forestry, on proposal of the Tuscany Region.
The strong focus on the environment and the quality of the food has allowed us to enter the circuit of Campagna Amica Coldiretti, as farm recognized, because we serve in our restaurant only agricultural products from Tuscany with origin guaranteed and controlled. 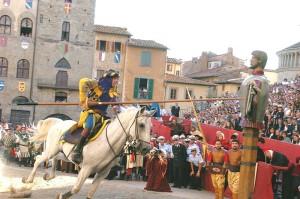 It is an ancient game of chivalry. It dates back to the Middle Ages. It was born as an exercise for military training. This tournament was regularly held in Arezzo between the 16th century and the end of the 17th century, when memorable jousts in baroque style were organized. The game went on for the whole Modern Age, having an important social function within the urban community. The joust was indeed a great public event during the visit of important authorities (sovereigns, princes, etc.), or it was used to make certain civil feasts more solemn (e.g. carnivals and nobless weddings). The joust – which became a typical tradition of Arezzo at the beginning of the 17th century – declined progressively during the 18th century and eventually disappeared, at least in its “noble” version. After a brief popular revival between the 18th and 19th century, the joust was interrupted after 1810 to reappear only in 1904 in the wake of the Middle Ages reappraisal operated by Romanticism. Finally, the joust was definitely restored in 1931 as a form of historical re-enactment set in the 14th century, and quickly acquired a competitive character. 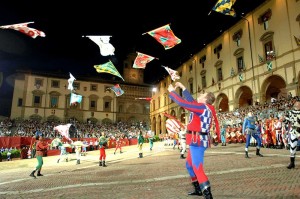 On the second Sunday in September is the most important  event of the Games Festival and in Piazza Torre di Berta “Let the Shoot begin!”  is the phrase which starts the century old challenge between the archers of Sansepolcro and Gubbio. During the challenge around eighty archers take turns at the shooting range and try to hit the exact centre of the target with their arrows. The crossbow challenge between Sansepolcro and Gubbio has been documented historically since 1594, but reliable historical sources confirm that the challenge took place even before then. The prize for the winner of the competition was a cloth made of wool (from the Latino “pallium”), the cloth was used to make a tunic. Today the prize has been substituted by a work of art made each year by a different artist.  The crossbow was thought to be the most powerful weapon until the invention of the firearm. The Torre di Berta square is surrounded by Renaissance buildings and is natural scenery against which  the archers and the costumed figures of the two cities parade, their entrance to the square is announced by the roll of drums and the sound of trumpets while the flag bearers  launch their coloured flags in the air. This is the peak of the cultural events which make Sansepolcro a true Renaissance stage among national historical re-enactments. 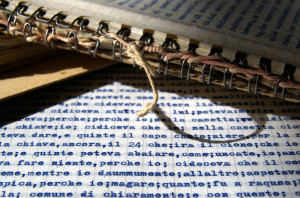 In 1984 following an idea of journalist Saverio Tutino, the National Diary Archive was born, it collects thousands of diaries, memories, epistles and testimonies sent from all parts of Italy. The aim of the Archive is not just to conserve these written passages but to take advantage of the wealth they contain in different ways. The seat of the archive today has more than 6,500 pieces, this number is destined to increase thanks to the “Premio Pieve”, an award which each year brings hundreds more manuscripts. This Year’s edition is mostly dedicated to the World War II and the Liberation.

Tuscany holiday rentals: booking September! has been designed for all those travelers who take advantage of the nice weather and the last minute to take the day off and relax from everyday stress.